This past winter I had the opportunity to take Jade Alicandro Mace’s, Community Herbalist “Food As Medicine” three-series class held at Blue Dragon Apothecary in Greenfield, MA. In my “chef role” at Round The Bend Farm I try to prepare nutritious meals for folks who live, work and volunteer on the farm. By preparing healthy meals using farm fresh ingredients I am contributing to their overall health and well-being. My intention in taking the class was to learn how to incorporate more health beneficial herbs/ spices into our diets. Some of the methods taught by the instructor were making various teas, bitters, oxymels, herbal vinegars, tonics, and broths. One of the first things we made in class was a bitter that consisted of rum or vodka (can also use apple cider vinegar instead of alcohol), 2 tablespoons of dried burdock, 1 spoon of orange peel and ½ spoon of fennel. It would be ready for use after a month as a digestive aid that one might spray 20-30 in their mouth minutes before a meal or even use it to redirect someone by having them use a couple of sprays.

“Food as Medicine” encouraged participants to intimately get to know various herbs and spices using several of our senses – sight, taste, smell and touch. Fresh herbs such as basil, rosemary, parsley, sage, and thyme were passed around and we formulated our own thoughts about how to describe them and the beneficial effects that they may have on one’s body. Words such as spicy, invigorating, warm, clearing, bitter, sour, cooling, and salivating were used to describe some of the herbs’ qualities. When we tried Shizandra Berries I think our instructor found various our reactions to be pretty priceless as most of us found them to start out somewhat sweet but quickly change to sour and pungent.

Once we spent time with the various herbs/ spices we discussed our findings and what we thought might be their health benefits of them and ways in which we could use them. For example, one might make an oxymel consisting of local honey, apple cider vinegar and chopped fresh rosemary and add it to a salad dressing. Jade shared a recipe of 1 oz. of water, 10 drops of essential oil, mixed with some witch hazel mixed each time and used as a spray as a helpful remedy for migraines and increasing mental focus. We tried several delicious teas one of which was very soothing and considered a heart opening tea. The tea consisted of coriander, tulsi and rose.

Jade shared a number of different recipes that we got to try in class that we found very tasty. The recipes presented were simple and had some flexibility in regards to the exact measurements and even sometimes ingredients used. Jade prepared an herbal spiced ghee made of local honey and powdered turmeric and suggested they be made into small balls which one could just grab one and eat daily. I have made an herbal spiced ghee since I have been back on the farm and adjusted the recipe to not only include local honey and turmeric but also added ginger, cardamom and cinnamon and we have been using it as a spread on bread.

The instructor shared the benefits for our nervous, digestive, cardiovascular, respiratory, reproductive, immune systems. She provided an informative manual for folks as well as several links and hand outs that I plan to use better serving myself and my teammates’ overall well being. I made a list of various fresh items I have access to on the farm and came up with a list of over 36 items that are beneficial to us. I plan to add making tinctures, oxymels, bitters, teas into my repertoire this coming season if not a few more beneficial skills that I can share with folks.

I could continue on writing about all the things learned in class but will end with a few interesting facts: Did you know that anise is 13x’s sweeter than sucrose? Ancient Romans used Cumin as currency; coriander seeds were found as far back as 7000 BC in King Tut’s tomb; that India has some of the lowest rates of Alzheimer’s likely due to their use of turmeric; and that dried herbs are more potent than fresh herbs. 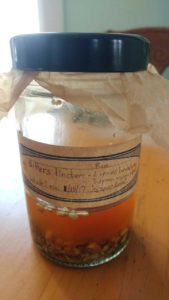