Identification and Harvest
Chickweed grows wild throughout the United States and is very common in Massachusetts.

It grows in sun or partial shade, and loves damp soil.  It can tolerate low mowing and thrives in disturbed soils, so it’s very common in lawns or gardens. 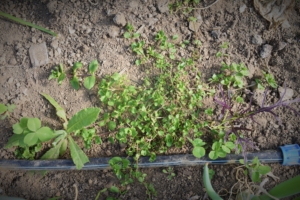 Chickweed is one of the first wild edibles that poke up in the early spring in Massachusetts.  As the weather gets warmer in summer, they set seed and die back down again.

To harvest, cut the chickweed with scissors or a knife.  For plants with particularly long stems, the tender tips and leaves will be most palatable.  All parts of the plant above the ground are edible. 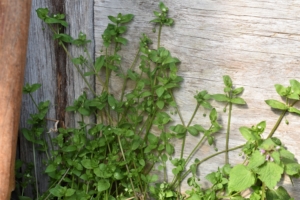 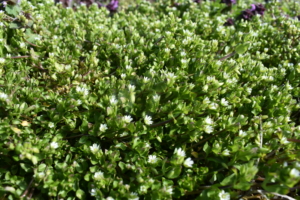 Chickweed grows in mats which extend outward from a central root system.  The stems can sprawl along the ground or grow somewhat upward, depending on space and light. 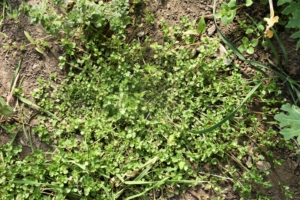 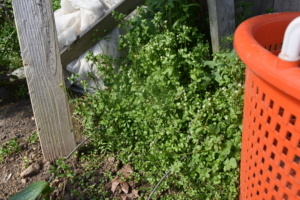 Leaves are simple, opposite, and shaped like tear drops.  The flowers are small, white, and have five petals.  Each petal is split down the center so they appear to have ten petals instead of five. 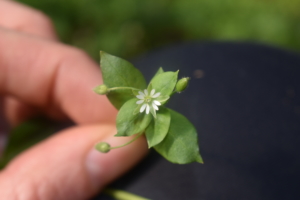 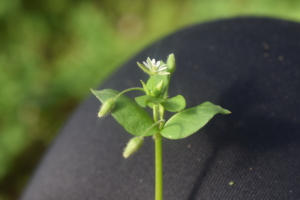 Chickweed has a single line of fine hair down the side of the stem, which people sometimes refer to as its “mohawk”.  The unopened flower buds are also somewhat hairy.  Chickweed does not have milky sap when the stem is broken. 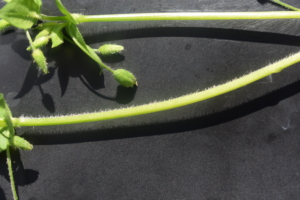 When identifying chickweed, always check the stem—it must have a line of hair, and it must not have milky sap when broken.  Scarlet Pimpernel is a toxic plant that looks similar to chickweed; however, this plant has a hairless stem.  Spurge is another plant that can sometimes be confused with chickweed; however, this plant has milky sap.  If you remember these two characteristics, you should not have a problem identifying chickweed.

Chickweed has tender leaves and a somewhat stringy stem.  You can eat it raw in sandwiches or wraps, chopped into salads, or cooked like spinach.  I sometimes dehydrate and powder it to add to baked goods and homemade pasta.  The flavor of chickweed reminds me of fresh sprouts.

Chickweed stores for about a week in refrigeration, but most people prefer to eat it fresh, cook it up, or dehydrate it for later. Dehydrated chickweed lasts for about a year.

The following are two great recipes adapted from the wonderful book, Wild Flavors by Didi Emmons.  Wild Flavors profiles the plants grown at our neighbor Eva’s farm (Eva’s Garden).  Eva is a passionate advocate of the flavor and nutritional value of chickweed, which she always refers to by its Latin name, Stellaria. 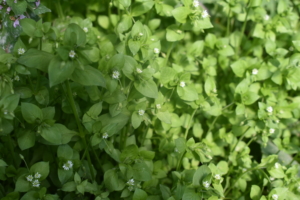 Helps to reduce swelling in the throat.

Combine all ingredients in a pot with eight cups of water.  Bring to a boil, then cover.  Remove from heat and let steep for 30 minutes.  Strain and serve.

This is a serious winner.