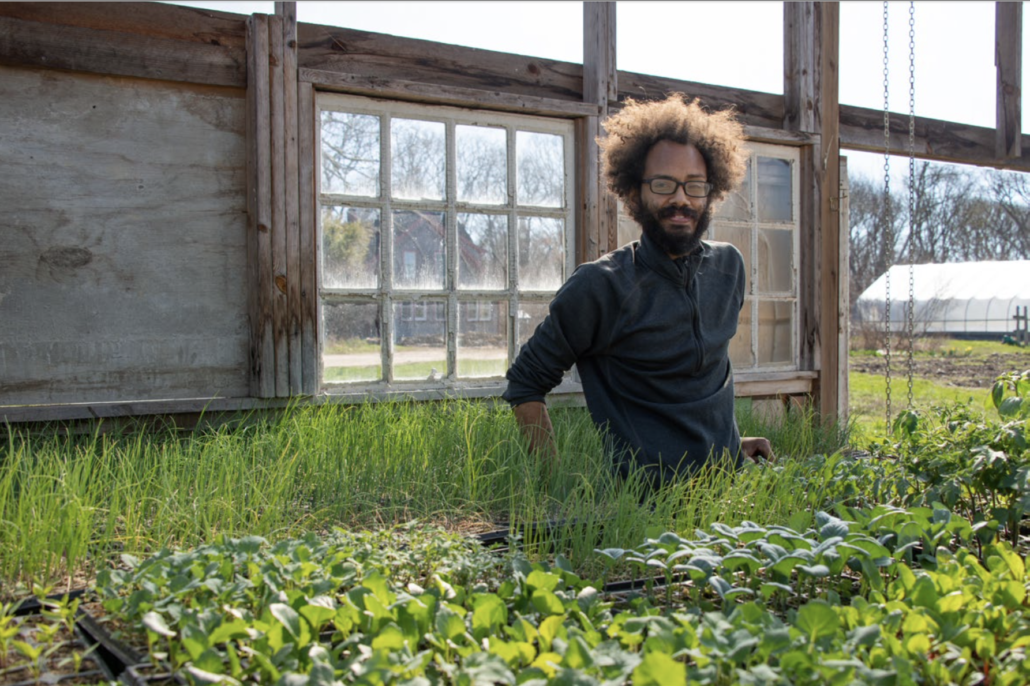 Benoit Azagoh-Kouadio sees farming as a symbiotic relationship between many organisms. “We are dancing and not wrestling with our ecological surroundings,” he says. “We are constantly adapting with a philosophy of respect for our interdependence.” On most days, you can find Benoit at Round the Bend Farm, a Center for Restorative Community, with his hands in the soil and a calm, determined look on his face. Small farming on the South Coast is a relentless, beautiful, and complex kind of dance. Benoit, now 33, grew up in Northern Vermont. Benoit started working at Round the Bend in 2016, and is now the garden manager. He maintains two acres of annual and perennial food crops, fruit trees, medicinal herbs, and flowers. He also mentors new farmers, makes herbal medicines for the farm apothecary, and hosts educational workshops for the larger local community.

For Benoit, farming is about more than crop production. It’s about engagement, balance, and systemic healing. He makes his own compost and arranges his work schedule in rhythm with seasonal and celestial patterns. He saves many of his own seeds and collaborates with local initiatives to protect indigenous and heirloom species. The result is a garden full of vibrant food that grows naturally as part of a larger integrated landscape. Before arriving at Round the Bend, Benoit studied psychology at Boston College, with a focus in neuroscience, psychopharmacology and holistic clinical practice. Since then, he’s been able to fuse his academic background into a unique perspective on farming and systemic healing. This perspective has also been shaped by his experiences of health and wellness
on the farm.

In 2017, Benoit contracted anaplasmosis, a tick-borne illness now common to the area. He became dangerously ill, and his doctor told him he was at risk for kidney failure. He took antibiotics, but for months afterward still felt sick. “It was a dark time for me,” he says. “I had come back to the point of functionality but I still felt worn out mentally and physically. I didn’t know what to do.” Drawing on his background in holistic clinical practice, he began researching alternative healing practices. He found a book called Natural Treatments for Lyme Coinfections: Anaplasma, Babesia, and Ehrlichia by herbalist Stephen Harrod Buhner, and began a regime of natural treatments. Once Benoit started taking Buhner’s recommended herbs, he began to feel better. “They were life changing,” he says. “I felt myself come back to 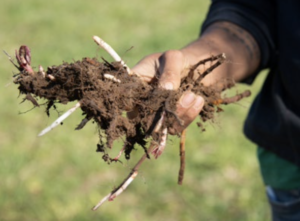 normal.” This bout with anaplasmosis was Benoit’s “ah ha” moment about the power of herbal medicine. After that, he began integrating more herbs into the Round the Bend gardens, and started crafting a holistic farm apothecary. Two years later, Benoit simultaneously contracted two other tick-borne illnesses, Lyme disease and babesiosis. This time he was prepared. “I felt very privileged because at that point I knew there was a whole body of work out there about how to address these illnesses with herbs, especially in cases when industrial pharmaceuticals are not sufficient.” Once again, he combined antibiotics with herbal medicine, and slowly began to feel better. “I think everyone in our town knows someone who has been impacted by these illnesses,” he says. “There is a need for more information and more access to herbal medicines.” He notes that although the South Coast has its ticks, it also has a lot of plants that heal tick-borne illness. Benoit now offers free workshops to help people learn how to heal tick-borne illness with herbal remedies. Japanese Knotweed is a common invasive species and a key anti-inflammatory for healing Lyme. I took a workshop. By the end, I was able to make my own Japanese Knotweed tincture and assess a range of other herbs for healing. My father, who had contracted Lyme and babesia recently, continues to use his herbal tincture as part of a long-term recovery strategy.

On the third Saturday of each month, Round the Bend Farm hosts Open Farm Days for the general public. Take a farm tour, eat a grass-fed burger, buy fresh produce, and take a free workshop. This year, Benoit will host his second annual workshop series, “Herbal Medicine for Tick-Borne Illness.”