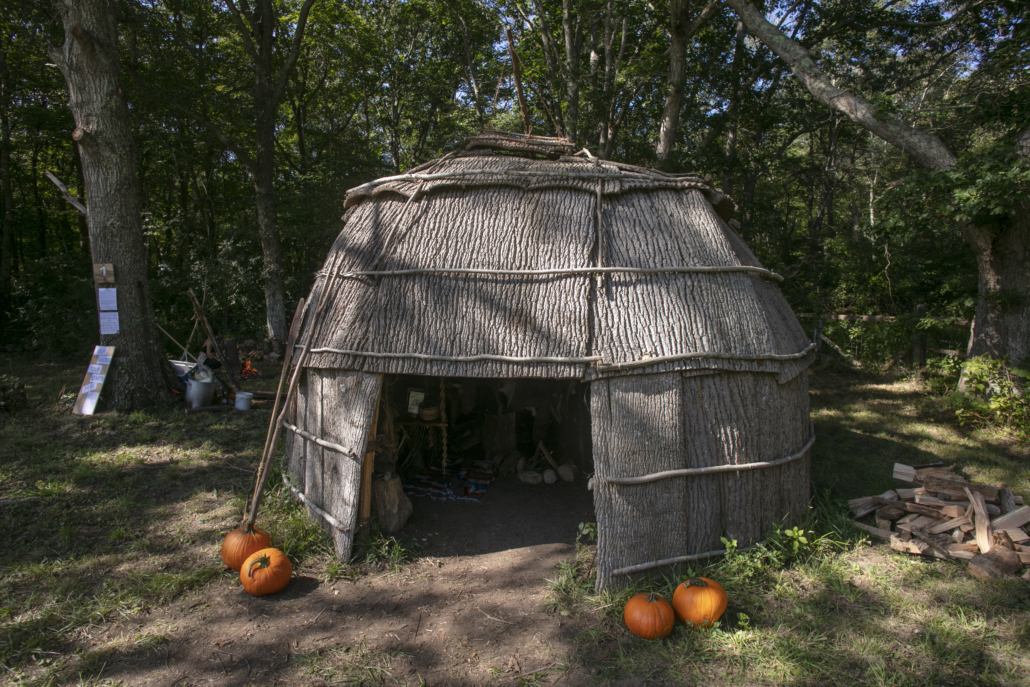 Annawon Weeden, a Mashpee Wampanoag presenter and performing artist, educates people about Indigenous history and culture, and through his work, connects people throughout the Southcoast community and beyond. From 2005 through 2015, Annawon was the opening performer at the Marion Institute’s Connecting for Change Conference in New Bedford, while Desa was serving as Executive Director. Over time, their working relationship blossomed into a trusting partnership.

The Wampanoag Experience, a project led by Annawon and sustainability consultant and educator Peter Crawley, began in early 2022 as a collaborative initiative to build relationships and understanding across cultures. The project began with the construction of a traditional Wampanoag wetu at RTB, and continued with the hosting of a powwow in conjunction with our September Open Farm Day.

Annawon and Peter, along with Merri Cyr (a dedicated volunteer at RTB and a talented visual artist and environmentalist) went on several site visits to find a home for the wetu building project. They wholeheartedly selected RTB, which felt like a full-circle moment. It became a continuation of Annawon’s working relationship with Desa, as well as a natural addition to RTB’s educational infrastructure and community outreach. Merri worked with the partners to secure the initial funding for the building of the wetu through the Westport Cultural Council’s Helen E. Ellis Trust Grant. Completion of the wetu was made possible with RTB through the generous support of The Bromley Charitable Trust.

In the spring of 2022, Annawon led the effort to harvest Eastern white cedar trees from a local swamp to form the wetu’s frame. With Peter and some incredible teammates from RTB, Elements, and other local community members, the volunteers peeled the poles, lashed them together, and finally covered the frame with poplar, black walnut, and ash bark.

During the building process, Annawon explained that a wetu is a womb-shaped, seasonal family home used by early Northeastern Indigenous people for hunting, fishing, and farming. Its low doorway reminds us to be humble, as most need to bow to enter the space. Annawon described how this structure was traditionally built when a couple married, and it became a home for that couple, their children, and the maternal grandparents. The family lived in the wetu for an average of ten years before building a new one in a different area to avoid taking too many resources from one spot. Typically, they let a spot “rest” for 20 years and lived in it for only ten.

RTB is grateful for the opportunity to collaborate on this project. The wetu has become the basis for expanded educational offerings about Native culture at RTB, and we look forward to continuing to incorporate it into many of our educational initiatives, including field trips, tours, and Open Farm Days. We see the wetu as an essential part of our story as an educational campus located in the Southcoast, the ancestral and present day home of the Wampanoag people.

“My goal is always to have people experience as much as they can. Everyone who gets to put a piece of bark on here and tie it–you’ve invested, you’ve participated in the construction, it’s basically your house. You know your community showed support and got involved. That’s what we want.”